Crocin is a carotenoid-derived natural product found in the stigma of Crocus spp., which has great potential in medicine, food and cosmetics. In recent years, microbial production of crocin has drawn increasing attention, but there were no reports of successful implementation. Escherichia coli has been engineered to produce various carotenoids, including lycopene, β-carotene and astaxanthin. Therefore, we intended to construct E. coli cell factories for crocin biosynthesis.

In this study, a heterologous crocetin and crocin synthesis pathway was first constructed in E. coli. Firstly, the three different zeaxanthin-cleaving dioxygenases CsZCD, CsCCD2 from Crocus sativus, and CaCCD2 from Crocus ancyrensis, as well as the glycosyltransferases UGT94E5 and UGT75L6 from Gardenia jasminoides, were introduced into zeaxanthin-producing E. coli cells. The results showed that CsCCD2 catalyzed the synthesis of crocetin dialdehyde. Next, the aldehyde dehydrogenases ALD3, ALD6 and ALD9 from Crocus sativus and ALD8 from Neurospora crassa were tested for crocetin dialdehyde oxidation, and we were able to produce 4.42 mg/L crocetin using strain YL4(pCsCCD2-UGT94E5-UGT75L6,pTrc-ALD8). Glycosyltransferases from diverse sources were screened by in vitro enzyme activity assays. The results showed that crocin and its various derivatives could be obtained using the glycosyltransferases YjiC, YdhE and YojK from Bacillus subtilis, and the corresponding genes were introduced into the previously constructed crocetin-producing strain. Finally, crocin-5 was detected among the fermentation products of strain YL4(pCsCCD2-UGT94E5-UGT75L6,pTrc-ALD8,pET28a-YjiC-YdhE-YojK) using HPLC and LC–ESI–MS.

A heterologous crocin synthesis pathway was constructed in vitro, using glycosyltransferases from the Bacillus subtilis instead of the original plant glycosyltransferases, and a crocetin and crocin-5 producing E. coli cell factory was obtained. This research provides a foundation for the large-scale production of crocetin and crocin in E. coli cell factories.

Crocin is the most valuable component of the Crocus sativus stigmas. It has an unsaturated conjugated polyenoic acid structure, derived from carotenoids [1]. Crocin has high medicinal value, with excellent anti-apoptotic [2,3,4], anti-hyperlipidemic [5], anti-atherosclerotic [6] and antioxidant effects [7, 8]. Additionally, crocin has been proved to have a significant inhibitory effect against a variety of cancer cells [9,10,11], and can reduce the side effects of antitumor drugs such as cisplatin and improve their efficacy [12]. Animal experiments have demonstrated that treatment of female rats suffering from colon adenocarcinoma with crocin isolated from saffron prolonged their survival and inhibited the growth of the tumors [13]. At present, crocin manufacture mainly depends on complicated extraction and purification from the saffron stigma. The resulting product has low purity, and the manufacturing process requires the large-scale cultivation of saffron crocus, which can destroy the natural environment. The lack of availability has been the main factor limiting the broader application of crocin. Therefore, it is desirable to develop more economical and environmentally friendly ways to produce crocin.

With the development of synthetic biology, biosynthesis of crocin from simple carbon sources in fermentation facilities with engineered microbes heterologously expressing genes or enzymes of interest has become a promising complement to traditional sources. At present, the biosynthetic pathway of crocin has been partially elucidated [14], and the technical difficulties lie in the screening of some key enzyme genes and regulating the synthesis of the corresponding proteins. The proposed crocin biosynthesis pathway (Fig. 1) starting from zeaxanthin contains three major steps, catalyzed by a carotenoid-cleaving dioxygenase (CsCCD2), an aldehyde dehydrogenase (ALD8) and UDP-glucuronosyltransferases (YjiC, YdhE, YojK), respectively [15,16,17]. Nevertheless, the glycosylation steps might require a variety of UGTs to obtain multiple structural forms (crocin-1 through -5) by sequential glycosylation. These forms encompass the crocetin mono-β-glucosyl ester (crocin-5), the crocetin β-glucosyl-β-gentiobiosyl ester (crocin-2), the crocetin di-β-glucosyl ester (crocin-3) and the crocetin mono-β-gentiobiosyl ester (crocin-4). 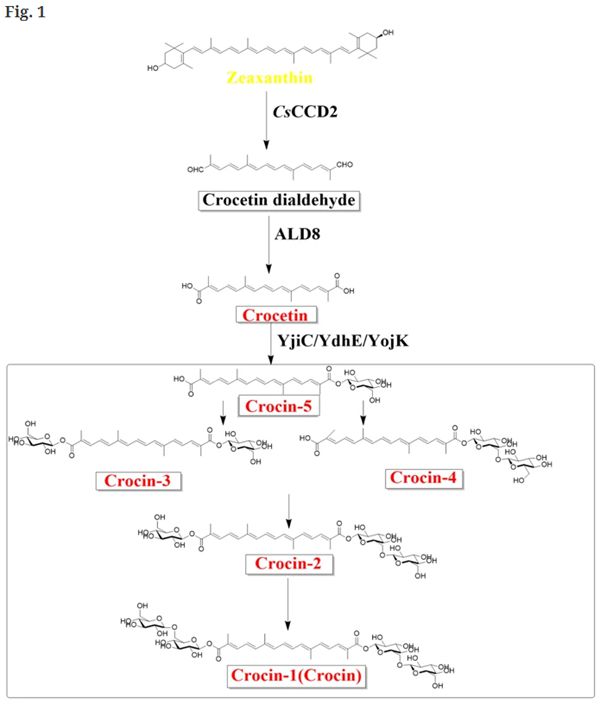 Fig. 1 Heterologous crocetin and crocin biosynthesis pathways initiated from zeaxanthin. Crocin-1, crocin-2, crocin-3 or crocin-4 and crocin-5 were obtained in vitro, and only crocin-5 was obtained in E. coli cells 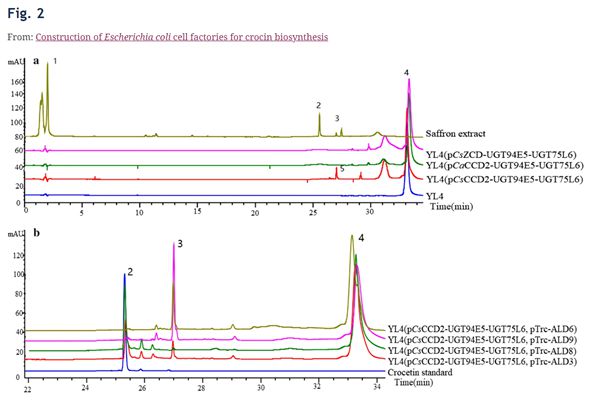 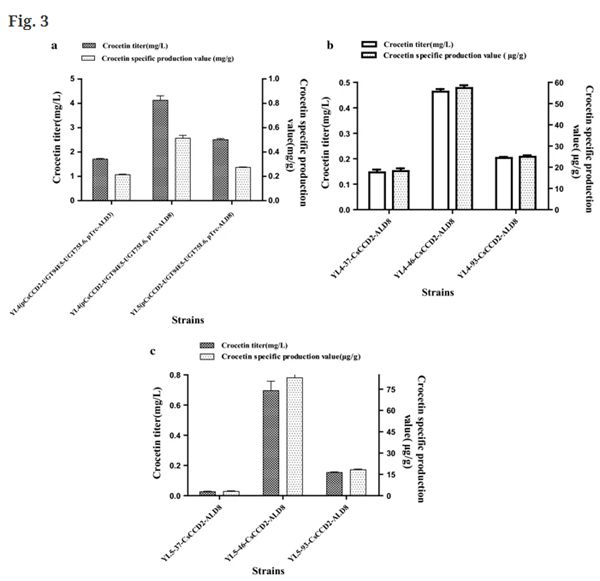 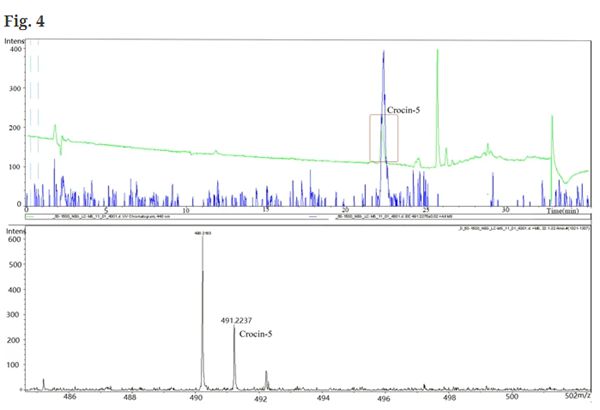 In this study, a heterologous crocin synthesis pathway was constructed in vitro using purified glycosyltransferases from bacterium Bacillus subtilis rather than the original plant glycosyltransferases. Subsequently, a crocetin and crocin-5 producing E. coli cell factory was obtained for the first time. Firstly, three different zeaxanthin-cleaving dioxygenases, the genes CsZCD, CsCCD2 from Crocus sativus, and CaCCD2 from Crocus ancyrensis, as well as the glycosyltransferases UGT94E5 and UGT75L6 from Gardenia jasminoides, were respectively introduced into zeaxanthin-producing E. coli cells. The results showed that CsCCD2 catalyzed the synthesis of crocetin dialdehyde. Next, the aldehyde dehydrogenases ALD3, ALD6 and ALD9 from Crocus sativus, as well as ALD8 from Neurospora crassa were tested for crocetin dialdehyde oxidation. It was found that ALD3 and ALD8 could produce crocetin in E. coli, whereby the latter had higher activity. Besides, the medium and fermentation conditions were also analyzed and a lower fermentation temperature of around 20 °C was found to be optimal. Using the optimized conditions, we were able to produce 4.42 mg/L crocetin using the strain YL4(pCsCCD2-UGT94E5-UGT75L6,pTrc-ALD8), which was significantly higher than the previous report of an engineered yeast strain with a titer of 1.22 mg/L in shake-flask culture [20].

Since no crocin was obtained using the plant-derived glycosyltransferases UGT94E5 and UGT75L6, similar enzymes from diverse sources were screened in vitro activity assays. The results showed that crocin and its various derivatives can be produced by the glycosyltransferases YjiC, YdhE and YojK from Bacillus subtilis. Subsequently, these genes were introduced into the previously constructed crocetin producing strain. Finally, crocin-5 was detected by HPLC and LC–ESI–MS in the products of strain YL4(pCsCCD2-UGT94E5-UGT75L6,pTrc-ALD8, pET28a-YjiC-YdhE-YojK).

Since crocin is glycosylated products derived from crocetin with four glucose groups, the derivatives of crocin are crocetin with different numbers of glucose groups in different patterns. Normally, since these derivatives have a same core, so that they may have different chemical properties and catabolic characteristics, but their medical effect should be similar. Although there was not medical reports concerning crocin-5, we speculated crocin-5 might have some if not all crocin medical activities. This research provides a foundation for the large-scale production of crocetin and crocin using E. coli cell factories. 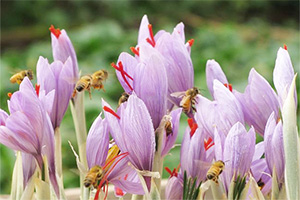 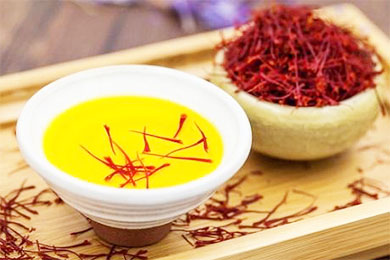 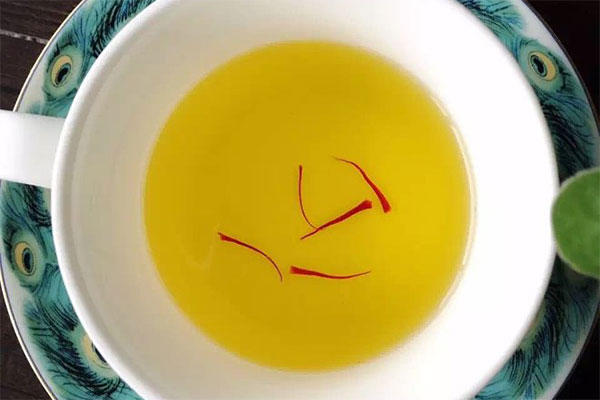 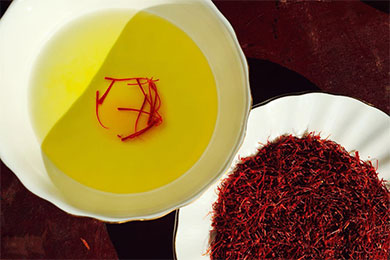 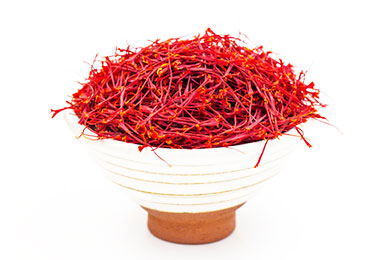